Bar and Column Charts are useful for comparing classes or groups of data. A group can have a single category of data, or can be broken down further into multiple categories for greater depth of analysis. In Clarion, a bar chart reflects the data on a horizontal axis, where column charts reflect the data on the vertical axis.

Also known as a Component Charts. When you want to draw a bar or column chart to illustrate your data, it is often the case that the totals of the figures can be broken down into parts or components.

You start by drawing a simple bar/column chart with the total figures as shown above. The columns or bars (depending on whether you draw the chart vertically or horizontally) are then divided into the component parts.

Some kinds of data look very nice and are easily understood in the form of a “floating” column, area, or bar, in which the data floats in the chart, spanning a region from a minimum value to a maximum value.

A line graph is the simplest form of graph type, usually used as a way to summarize how two pieces of information are related and how they vary depending on one another. 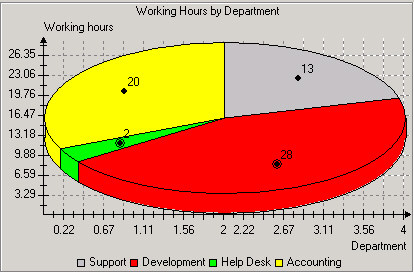 A pie chart is a good way of showing the constituent parts of a variable. It consists of a circle split into segments. The segments represent individual parts which, taken together, make up the total.

The 360o circle is divided in proportion to the parts that make up the total.

An important use of scatter graphs is to show how one set of results relates to another.

If the points on a scatter graph appear to be randomly scattered there is unlikely to be any correlation between the two sets of data being measured.

If they form a more regular pattern then there is likely to be a correlation between them.

Except where otherwise noted, content on this wiki is licensed under the following license: CC Attribution-Share Alike 4.0 International