The options in this dialog control the versions of Clarion that the IDE will register and recognize in the project system.

Use this dialog to verify versions, roots and redirection paths. The versions that you specify here will be available directly in the IDE Project Options.

Versions are detected by the IDE by reading the install entries in the Windows Initialization file (WIN.INI). If for any reason a version you have installed is not detected, you can manually add it here. You can also remove any version that you do not need to use in the IDE. 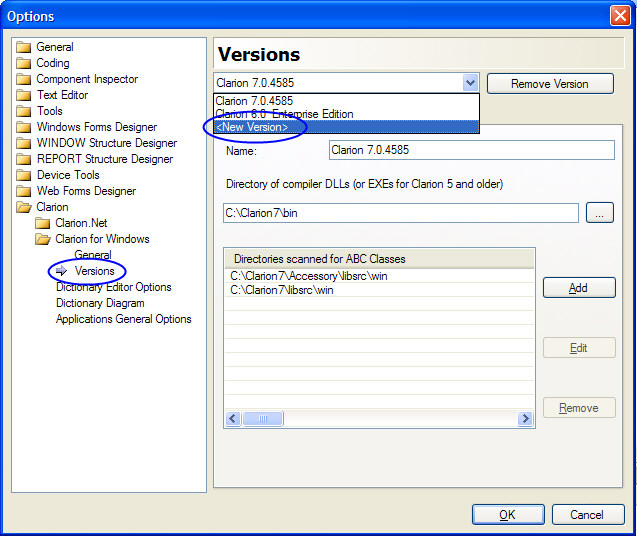 This tab displays the name of the current version selected, a path that points to the version's compiler DLLs (or EXE), and paths where the IDE will scan for ABC Classes.

If for some reason you do not see ABC headers being read and there are no ABC classes loaded in the IDE, you can add/change/remove the ABC path used by the install.

The Clarion IDE also allows you to use prior versions of the Clarion compiler/linker to build your project. By default when you use an older version of Clarion, the INCLUDE directive is disabled. This is to maintain compatibility with the older redirection files.

In the Tools/Options/Clarion/Clarion for Windows/Versions dialog, if you select an older version of Clarion and go to the Redirection File tab you will see that the Can use the {include} directive is not enabled. If you enable this and change the name of the redirection file you can use the new include directive and not break the redirection files if you need to use the older IDE.

After changing the redirection name you will need to create a newname.red file in the bin directory of that version of Clarion with the line

Then you can create local redirection files by right clicking on the project in the Solution Explorer and selecting “Create Redirection File in the project directory” allowing you to use the power of the Clarion 8 redirection system without stopping you using the older IDE.

Except where otherwise noted, content on this wiki is licensed under the following license: CC Attribution-Share Alike 4.0 International